I’m excited to introduce to you our May GT (globetrotter) of the month Pier Garcia, who originally hails from  Trinidad and Tobago, but is currently residing in the Czech Republic. She has been an active member of the iluv2globetrot travel community and has such a positive energy that we’re delighted to introduce her here to you all. Check out her interview her and see how’s maintaining her dream of living this expat lifestyle. Enjoy GTs!

Can you tell the I Luv 2 Globe Trot community a little about yourself (where are you from, what do you do, where are you currently based, hobbies etc).

I was born and raised in the beautiful twin island republic of Trinidad and Tobago. Then, I moved to England when I was a teenager. After university, I worked in London for a few years, but I felt I needed a change. That’s when I became an EFL teacher. I currently live in the Czech Republic, teaching English at a great school. It’s been an extremely interesting and challenging experience, not only professionally, but also culturally. I’m still learning a lot out here and I hope to continue to do so right up until my chapter here closes in a couple of months.

I enjoy cooking/entertaining or limin as we say in Trini. I started snowboarding in 2011 and I’ve done it every winter since then, apart from this last one. That being said, I still spend most of it on my butt. I also like to do a bit of drawing, painting and yoga, for relaxation. In the last year, going wine tasting has become a thing I like. Travel, of course, is a passion of mine.

How many countries have you traveled to?

I have been to 32 countries, the last being Turkey. Slovakia is next on my radar and then Australia later this year.

What is your dream destination and why? (think bucket list destinations).

Brazil. I’m not exactly sure why. I have always been drawn to it and I’ve had a longing to go there for many years. I’d ideally like to live there so that I can really get to know the country. Failing that, I would like to visit for a minimum of a month so I can get a decent feel for things.

What made you decide to live an expat lifestyle abroad?

I was fed up of living in London. The weather, the expense, the commute. I had been over it for a while and was restless, but I just carried on plodding along. Then, in the middle of job hunting, I decided it was time to stop pushing those feelings to the back of my mind and pay attention to them instead. Something had to change. I was initially considering heading back to Trinidad, but my desire to see more of the world overruled that. Instead, I took a huge leap and moved to the complete opposite side of the globe. Over 9000 miles from one home and 5000 miles from the other. I went to a country I knew nothing about and to a city where I knew no one.

What are some challenges you have faced trotting the globe?

I’m someone who tries to remain positive even when things are crappy. That was really hard when I moved to Korea. The overall experience was a high, but like any great rollercoaster ride there were twists and turns and lows. Since I generally don’t advertise negative stuff (unless I really need to vent) as I think it just perpetuates things, I think people just perceived it as this amazing journey only full of fantastic new things and boundless adventure.

There was that, but there was also the loneliest of feelings. Feeling alone when you are in the company of wonderful people is a hell of a thing. I was blessed to be surrounded by some truly lovely people, but still, having someone who truly knows you is a completely different feeling. And that’s something you can’t force, nor conjure up.

The challenges this time around are very different and unexpected. For example, I get stared at way more than anything I can compare to in Korea. I’m closer to home, flights are super cheap and the exchange rate of GBP to CZK is ridiculously good, so I thought that would mean visitors galore– not so.

Care packages… pfft what’s that? Letters and I actually think even whatsapp messages have halved. It’s definitely different from my first stint abroad. That sucks, but it comes with the territory. “It’s the life I chose,” I say to myself and to fellow expats who feel similarly. It’s the life we chose. At home life goes on, so I guess I’ll have to find a different way to cope with this new aspect of things. All part of the learning and growing that comes with this lifestyle.

Where was your most recent travel destination you trotted to?

Most recently, the Bohemian side of the Czech Republic. I live in Moravia, so it was really nice to see the other region. We started in Telč which is still in Moravia and then went to on to České Budějovice and finished in Český Krumlov. They were so gorgeous. We felt like we were in a fairytale.

Internationally, my last trip was over Easter to Istanbul. I’d been to Turkey before, but never to Istanbul and I had always wanted to go. My South African friend that I met while we were both teaching in South Korea wanted to go for her birthday. Since December we were talking about it, but then she said nothing for a few months. I tried to remain patient and it paid off! About two weeks before the date we had spoken about, she confirmed her booking and I followed suit. It was a blast. We hadn’t seen each other in over a year and it was just brilliant to catch up, explore that amazing city and celebrate her birthday.

Which, if any, foreign languages do you speak?

I speak Spanish, which is extremely rusty at the moment and beginner Korean. Since living here I’ve taken Czech classes and been doing language exchange with one of my colleagues, but it really hasn’t been easy. I find it much more difficult than learning Korean was. The Czechs find that unbelievable, but it’s 100% true.

What do you have planned for yourself next? (any projects you’d like to promote, etc). Would you ever consider the expat lifestyle to assist with your globe-trotting?

Next up will be a new job, a new country and a new chapter. I haven’t decided where yet, but I have managed to narrow down the countries, which is no easy feat with my insatiable desire to explore. Some of the places shortlisted are there because they’re in a region of the world I haven’t seen much of yet and I’m ready to learn more.

I plan to continue writing along the way and this year I hope to feature some pieces on other websites and on other blogger’s sites. I have also started my own Facebook group, The Wandering Pier and a page of the same name. I’m really pleased about their progress and the little community the members have created. It makes me really, really happy. 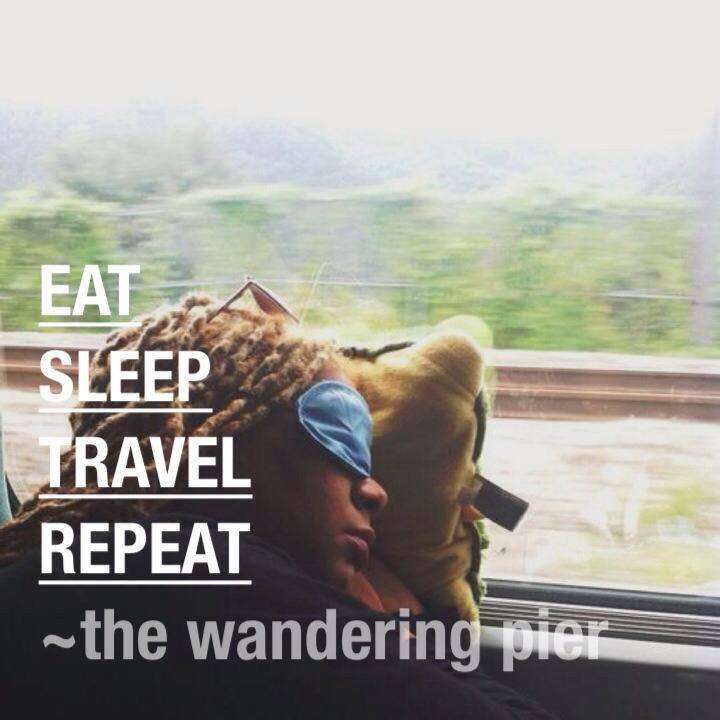 What are some words of wisdom you would like to give to future inspiring globe-trotters and expats?

Don’t let fears stop you from doing anything, because the feeling you get once you’ve faced them are too amazing not to try.

[…] can check out the interview here on their website: http://www.iluv2globetrot.com/globetrotter-of-the-month-pier-garcia-of-the-czech-republic/ . Hope you […]

Enjoyed your interview! The world gets smaller the more you travel. We are gaining friends from different countries along our journey as well. Isn’t it fun to have that reunion? I love things like this – South African friend you met teaching in Korea and reunite in Turkey. Ahh, the glorious lives we lead…

Love reading about other Caribnean women who are living life by passion. I never thought about the loneliness of expats but I see that there’s rar ill opportunity to make friends with other expats experiencing the same thing.