I didn’t know when I started planning my trip in early 2018 that there would be a big push for African Americans to return to Ghana just the following year. 2019 has been coined “Year of Return” by the Ghanaian tourism board.

It’s the year requesting that African Americans come ‘home’ for a visit, 400 years since the gruesome, horrific and life altering Transatlantic Slave Trade, which transported somewhere between 10 million to 12 million Africans across the Atlantic Ocean to the Americas.

Ironically enough, I conducted a DNA test a couple years prior and decided after learning that my lineage was over 20% Ghanaian, that I had to explore Ghana. Upon my arrival, I instantly felt at home. Zipping through the immigration process swiftly and having the customs agent reply “welcome home sister.” 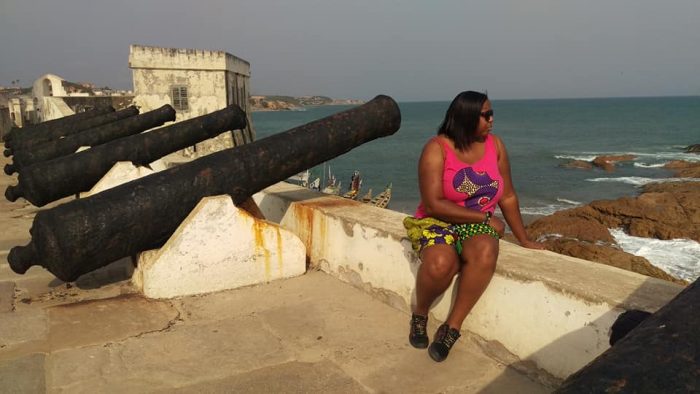 After getting the much awaited Ghanaian passport stamp and feeling a sense of glee, my joy continued to overflow as I heard the live jazz band playing a roaring, upbeat melody of piano strings and bustling horn tunes in the airport hall. I thought to myself, “well this is a first!” In the almost 50 countries I’ve visited, I had never seen a live band greeting people at the airport in the baggage claim area. My next thought was, “now this is the kind of greeting a girl can get used to.” This all further extended my beliefs that the time is now, this is where I’m meant to be in this moment.

Even though my initial ‘homecoming’ reactions were filled with glee and excitement, these were not the emotions that were felt throughout my trip. One of the main reasons I desired to visit Ghana was to become entranced by the massive slave castles along the coast. The coast once coined the Gold Coast, transitioned to the slave coast, in order to forcibly export African bodies to lands in the Americas.

I needed to stand in the pain. I needed to feel the horror that my ancestors faced hundreds of years prior. The eerie feeling upon entering Cape Coast Castle was a slow ache, becoming more and more menacing the more I approached the dungeons. My guide explained the lineage of the slave trade as we stood outside of the male dungeons, which he told me could hold 800 African bodies.

As we entered the dungeon, the first thing I noticed was the overarching stench. It was as if death was still upon those underground dungeon walls. I couldn’t even phantom how hundreds of years later, the smell could still be so strong, so flagrant flowing through my nostrils in that moment. My guide pointed out that there was one single, miniscule opening in the dungeon, where a ray of light shined through in that moment. The dungeon was brightly lit with installed light fixtures to lead our way through the encompassing walls of the chambers.

Once my guide told me to stay put, as I was the sole body on his tour, he strolled back to the entry to shut off the lights so I could get a feel for what it was like for the slaves back hundreds of years ago, standing tightly clenched in the cold, damp cells. In that moment as the lights went off and I stood dead in the center of the underground dungeon chambers, I instantly broke down. The tears shed uncontrollably, with a shiver of cold streaming down my back.

I could feel my and many others’ ancestors in that moment. My guide came back and in an attempt to comfort me, gave me a soft hug replying “it’s ok sister, It’s ok.” As I exited the chambers and felt the sunshine hit my once cold skin, I decided it only right to hold my head high. I did what many others were not able to do in this Year of Return.

It was a full circle moment to walk freely through the slave castle that once transported my ancestors to the Americas. In that moment, I felt truly free, determined to continue to be and live out my ancestor’s wildest dreams.