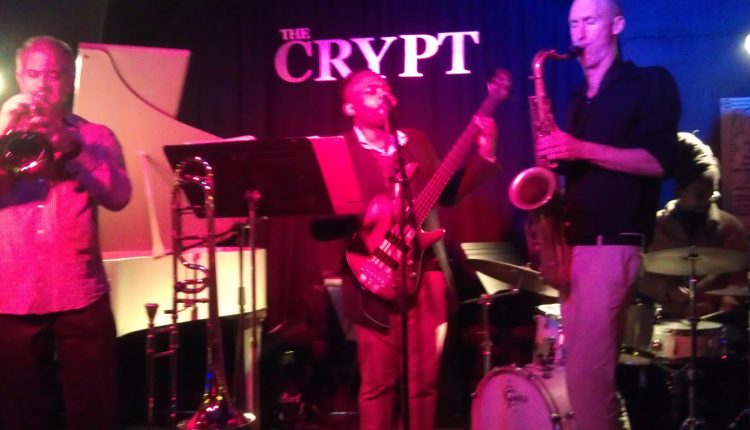 Cape Town is such a dynamic city. From walking through movie sets at the Company Gardens, to visiting the prison cell of Nelson Mandela on Robben Island, I’ve managed to see my fair share of the city. Recently I dined at the eclectic “The Crypt” jazz restaurant that is located beneath the St. George’s Cathedral on Wale street. I must say that is was indeed a first, to dine underground in an old crypt of an historic place such as St. George’s.

As I arrived a tad bit early to meet my friends there, it was nice to hear the  Nelson Malela Quartet preparing for the evenings’ show. The waiter actually thought I was going to perform, to his dismay I told him “you don’t want that lol.” Nevertheless, he joked that hopefully I will enjoy his performance.  I was so shocked and amazed that during the intermission of the quartet band (along with a special contribution from another jazz great), that the same waiter commanded the stage belting out opera classics! I truly enjoy the band that played as well, but for me this young man stole the show!!

One could see the manager delegating behind the scenes of the performances, with a proud flair about him. He even managed to play the piano for my new favorite opera singer here in Cape Town ;-). The jazz ensemble played a fusion of pieces from the Congo to French and Portuguese vocals.  It was such a delight to hear varied languages, tones and instruments from the mellow group of performers.

The food was tasty and enjoyable at the same time.  I dined on the grilled chicken (which was Slightly over-grilled for my liking but still enjoyable) and some divine ratatouille and rice. The price range is mid-range so I recommend if you are on a budget to maybe go for a cocktail or glass of wine and chill out to the jazz sets.  One does have to pay a cover charge of R55 for the performances (which is totally worth it).

Nevertheless, if you’re on a tight budget then drinks and music would suffice.  Globe-trotters and the like, if you care to have a great soothing night out while trotting to Cape Town, I can highly recommend an escape to The Crypt. You won’t be disappointed!

Globe-Trotter of the Month Taiwanda Bason of China!

How the Stars Aligned for My Journey ‘Home’ to Ghana During…